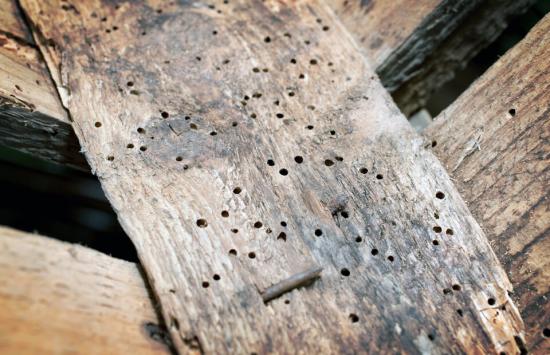 A Complete Guide to Treating Woodworm

With woodworm, it’s important to act quickly and use the correct woodworm treatment. In order to do this, you need to correctly identify the type of wood-boring beetle. Our guide takes you through the different types, identification and ultimately how to get rid of woodworm.

HOW TO IDENTIFY AN ACTIVE WOODWORM INFESTATION

HOW TO TELL IF WOODWORM ARE ACTIVE?

WHERE CAN YOU FIND WOODWORM?

HOW SERIOUS IS WOODWORM INFESTATION

HOW TO PREVENT WOODWORM

HOW TO GET RID OF WOODWORM

Woodworm is the common term used to refer to the larvae of all wood boring beetles. There are several species found in the UK, but most of the damage is caused by the offspring of the Common Furniture beetle. 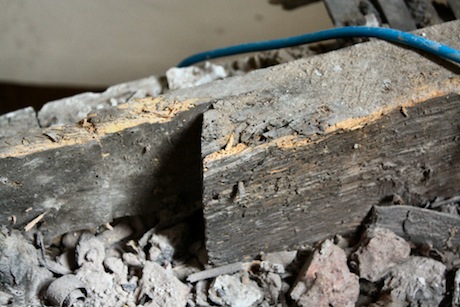 Woodworm larvae are usually a creamy white colour and have curved bodies. It’s highly unlikely you’ll ever actually see woodworm larvae, as they stay hidden munching away on timber until they are fully-grown. Adult wood boring beetles look different depending on their species: the Common Furniture beetle is a brown winged beetle, typically 3-4mm in length.

The complete lifecycle of a woodworm takes place over a two to five year period. There are three stages of woodworm development egg laying, hatching/tunnelling, and transformation:

The woodworm cycle begins when an adult female wood boring beetle lands on a wooden surface and lays her eggs just under the surface in pores, cracks and crevices. Her aim is to secure the eggs in the safest condition possible to give them the best chance of survival. In any given laying cycle, a female can lay anything between 20-50 eggs in a single batch.

Within a matter of weeks the eggs will hatch from the bottom to produce larvae. These small larvae will then burrow their way through the wood for anything between two to five years. Over the course of this time, a single larvae will tunnel extensively which is how large batches of the creatures can seriously damage structural integrity.

As time passes, the larvae begins to mature and will tunnel its way towards the surface and create a “pupil chamber”. This small room acts as a final staging area where the larvae can rest and begin its transformation into an adult beetle. When the time is right, the newly transformed beetle will bore its way to the surface and fly away, ready to mate with a female and restart the process. 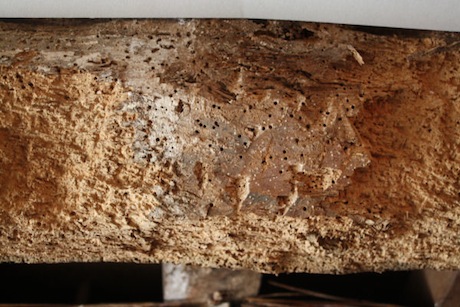 What are the signs of woodworm infestation?

It can be tricky to tell if you have an active woodworm infestation as the main damage is caused inside the timber and you’re unlikely to see any visible results for years. However, there are a number of tell tale signs that can help you identify a potential woodworm infestation:

-       Small round holes in your woodwork, typically 1mm to 2mm in diameter

During the summer months (woodworm season is May to October), you may also spot adult wood boring beetles emerging from holes within the timber. Once a wood boring beetle has chewed itself out of hiding, it instinctively heads for light. So check for live or dead beetles around a suspected woodworm infestation and on the windowsills.

Steely Blue beetles are the main predators of the Common Furniture beetle, so if you see them wandering around it’s probably because they’ve found a good food source close by.

Exit holes are probably the most obvious sign, but they do not occur until the adult beetles are ready to leave the timber, years after hatching as woodworm larvae. So it’s good practice to look for signs of frass on the back or underside of old furniture.

Finding holes and frass on your furniture or flooring isn’t always a cause for concern, they might just be signs of a previous woodworm infestation which has long been dormant. If you are unsure, it’s best to consult a woodworm specialist.

How to tell if woodworm are active?

Judging whether the damage you’ve found is an active woodworm infestation or not is always the hard part.

One popular method for testing for an active woodworm infestation is filling the exit holes with beeswax or tissue paper, leaving it for a year and seeing if any adult beetles bore through in the next year. Whether or not you give this a go, it’s always best to talk to a specialist before going ahead with any treatment.

Where You Can Find Woodworm

Woodworm can be found in all manners of wood surfaces including:

The Common Furniture beetle can be found in both softwoods and hardwoods. Though it has been found in many places, it generally prefers damp floorboards, loft timbers.

Female Furniture beetles tend to choose hardwoods with a moisture content of 28% or higher to give their larvae the best chance of pupating into adults. However, woodworm can be found living in timber down to 12% moisture content. The dryer the wood gets the harder it becomes for them to feed.

Unprotected wood with little to no laquer or protective finish is prefered by wood boring insects like woodworm. This is because exposed wood without varnish is more likely to be kinked, rough and therefore easy to nestle eggs into from a hatching perspective. Secondly, the lack of a sealant protection means that it’s easy for a newly hatched larvae to quickly bore through the grain.

What woods do woodworm dislike?

Common Furniture larvae will only eat the outer section or ‘sapwood’ of a tree. This is because it has more nutrients and is toxin-free, unlike the inner ‘heartwood’ of timbers like pine and oak. If your furniture is made from good quality heartwood, you are at much lower risk of getting a woodworm infestation. Sapwood is normally lighter than heartwood so you can spot where the high-risk areas are.

Although the furniture beetle is the most commonly found species of wood boring insect in the UK, there are also a number of other species to watch out for. Being mindful of different species is important as they have different damage capabilities and prefer different timbers.

Deathwatch beetles prefer hardwoods such as Oak, Elm and Mahogany that have been softened by fungal decay. These are most often found in older buildings and antique furniture. These beetles are most common in central and southern England. They are known for the distinctive tapping noise the adult beetles make when attracting a mate.

House Longhorn beetles are mainly found in the south east of England, and are particularly common in north west Surrey. The House Longhorn beetle is the most damaging wood boring insect. It attacks the sapwood of dry softwood and grows up to 30mm long. They leave exit holes of up to 10mm in diameter.

These beetles love partly seasoned softwoods including pine, spruce and fir, and are most commonly found in roof timbers. Larvae produce large quantities of frass containing small pellets, which leave a blistered appearance on the surface of the wood. The larvae can seriously damage timber within their growth period, entirely destroying the sapwood and leaving only the veneer.

How serious is Woodworm Infestation?

The extent of damage caused depends on the species, the size of the infestation, and what has been infested. Not all woodworm is harmful. However, if left untreated over time, woodworm can seriously weaken timber, causing severe damage within its structure.

At this point, weakened structural components could give way resulting in a large repair expense or at worse; serious injury. It is for this reason that a woodworm infestation is a significant issue if found in:

As mentioned, there are many factors in determining the impact and extent of an infestation and this needs to be confirmed by a professional before any action is taken.

How to prevent woodworm

Though it’s difficult to keep woodworm out completely, you can definitely make your home less appealing by:

How to get rid of woodworm

Before treating any kind of woodworm, it’s extremely important to correctly identify the type of woodworm you’re dealing with. If you are unsure, it’s always best to consult a specialist.

If your woodworm problem only affects small items such as furniture, you can effectively treat it yourself using the right techniques and treatments.

You can easily treat Common Furniture beetles with a brush, dip or spray application of a Permethrin-based woodworm treatment on all timbers affected by woodworm. As a precaution you should also treat any close by timbers to protect against future outbreaks. Don’t forget to re-paint and re-varnish treated surfaces when they are dry.

Death Watch beetle infestations occur deep within timber, so it is essential to treat by injection as well as a surface treatment. This can be done by injecting woodworm treatment spray into the exit holes left by the adult beetles. Or it can be done by drilling into the danger zone and filling the wood with a paste or gel woodworm treatment. The larvae of the Death Watch beetle often causes more harm than the Common Furniture beetle, so it’s good to check with a professional before going ahead with any treatment.

If you suspect you have a House Longhorn woodworm infestation it’s always best to consult a specialist. All timber within the building will need to be treated and inspected for its structural integrity. If your timber is free from severe structural damage and the infestation is minor, it may be safe to go ahead and tackle it with the same treatments and methods you would use to treat Death Watch beetles. But you must be very careful with this species of woodworm.

A professional should treat any severe infestations that has caused extensive damage.

Permagard Woodworm Killer (Ready to use) is perfect for treating woodworm caused by Common Furniture beetles. It contains Permethrin, which is effective against all the life stages of wood boring insects. Other treatments can only target one life stage.

Our ready to use woodworm killer has been specifically designed to protect furniture, flooring, structural and other timbers. It is designed to be rapidly absorbed into the wood giving higher levels of penetration. It is odourless and can be applied either by brush or low-pressure spray to give long lasting protection. And at just over £10 ex VAT for five litres you save over a third when you buy our ready to use Woodworm Killer online.

Click here to view our full range of woodworm treatments, and please give our experts a call on 0117 982 3282 if you have any further questions about treating woodworm.

Read more in How to Restore Woodworm-Infested Antique Furniture.

Get the Job Done!
Recent Articles
Garage Conversions: The Ultimate How To Guide
Waterproofing vaulted ceilings: how to guide
Tanking Live Leaks in a Basement - How To Guide
Installing a Sump Pump - How To Guide
How to make a sunken garden - drainage guide