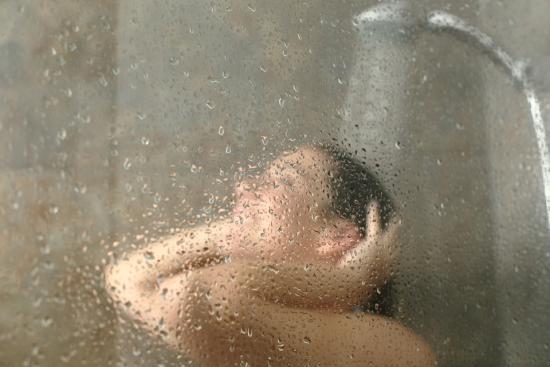 How to avoid condensation in your bathroom and prevent mould

The bathroom is more likely to suffer from condensation than any other room in your property. This is because a large amount of moisture is produced when you shower or take a bath, increasing the humidity level in the room. If your bathroom is not well ventilated, humid air will condensate on surfaces and lead to mould growth.

Bathrooms contain surfaces that are prone to condensation. These include windows, cold walls and ceilings. This excess moisture is what causes black mould. Small amounts of mould are harmless but prolonged exposure to mould can cause skin and respiratory conditions to worsen.

If your bathroom is suffering from condensation, you will notice droplets of water on gloss-painted window sills. You will also see black mould forming on the walls and ceilings.

In order to deal effectively with condensation in the bathroom, you must first reduce the amount of condensation. You can then look to tackle the mould. This guide is split into two sections:

Importance of preventing mould in bathrooms

Mould is all too common in bathrooms, especially when it’s relatively easy to prevent. As well as looking and smelling unpleasant, black mould can also be a health hazard.

It’s hard to have a relaxing bath when surrounded by patches of black mould, especially since bathrooms are meant to be places of cleanliness and sanitation. Mould can also pose a serious risk to your health if you are exposed on a long term basis. Mould can thrive out of site (behind a sink or on a window sill for example) and could be causing you harm without you knowing it. With bathrooms being consistently warm and wet, mould can multiply quickly.

The impact of mould on health

The effects of mould on our health can be surprisingly serious. Essentially a mould bacterial culture is a living organism that when it grows starts to produce airborne spores containing toxic substances. Exposure to mould spores can cause rashes, itchy eyes, sneezing, coughs, dizziness and nausea - we cover symptoms more below.

The long term effects of mould exposure can be more severe for those with a weakened immune system. As the body goes into overdrive trying to fight the foreign pathogens, it is left weakened, exposed and vulnerable to other diseases. The elderly, children and those with existing allergies are all considered to be more susceptible to mould exposure.

What are the symptoms of mould exposure

How do you know if you are being exposed to mould? One of the big problems is that the symptoms are fairly non-specific. Symptoms of black mould exposure could include any of the following:

How to prevent mould in bathrooms

To prevent mould in bathrooms, you need to control and reduce condensation. The best way to do this is with improved ventilation. There are different options when it comes to bathroom ventilation. You can also take some simple steps to reduce condensation around your behaviour when you shower and take a bath. We will explore your ventilation options as well as share some tips in the following sections.

Reducing Condensation in the Bathroom

Ventilation systems are designed to be installed in areas that suffer from damp and mould-related issues such as bathrooms. Permagard’s very affordable Perma-vent replaces moisture-laden air with fresh clean air, forcing contaminants to leave the home. Passive ventilation units use the passive principle and therefore don't require electricity. Extractor fans use electricity to achieve the same results. 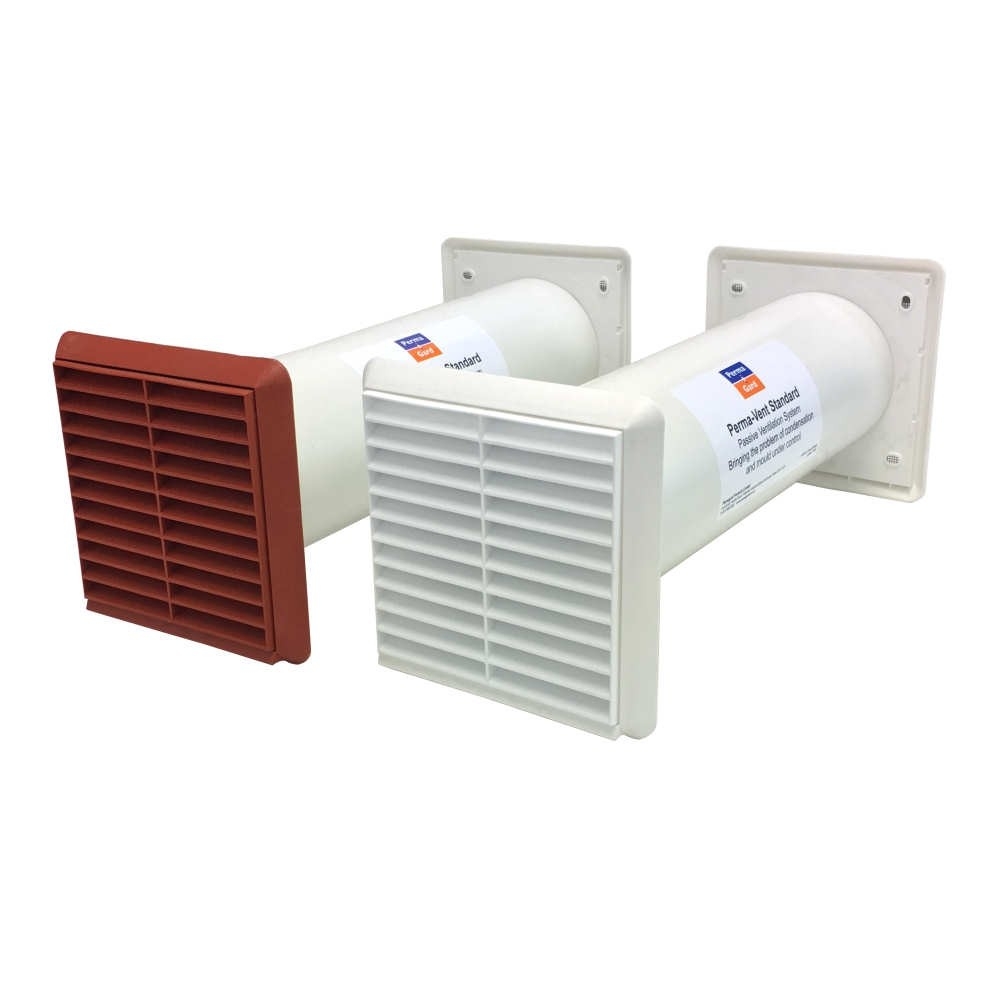 When it comes to preventing condensation in your home as a whole, bathroom ventilation is key. Some of the moist air created when you bath or shower would ordinarily circulate around your home, causing more widespread condensation issues. A well-ventilated bathroom will reduce the amount of moist air circulating within the rest of your property.

It's also a good idea to cross-ventilate your entire home. This involves opening windows at opposite corners of your home and allowing fresh air to circulate throughout your property.

Free ways to reduce condensation in your bathroom

Condensation can be controlled by you and for free by simply changing your behaviour in the home. You can reduce the risk of condensation by doing the following:

• Wipe down all surfaces, including bath units, windows sills and tiles to remove any excess moisture

Other ways to avoid condensation

Condensation is likely to occur if homes are under heated. Keep your homes above 16 Celsius at all times and this will help prevent condensation forming on outside walls.

Homes which suffer from severe condensation usually have poor insulation. It is important to make sure all of the rooms in the home are warm during the winter months, therefore increasing the temperature of cold surfaces.

Getting rid of Mould in the Bathroom

A major mould infestation in your bathroom can cause damage to your home as well as your health. Bathrooms are more prone to mould and condensation. as they suffer from higher humidity and are poorly veniltated. Luckily, mould infestations are relatively easy to manage and treat providing you are proactive with your approach. Follow these steps:

Wiping wet surfaces after use is a quick and easy way to prevent mould growth. Regularly clean the bath tub, the basin, the shower, the tiles and ceilings. Also, don't forget about the silicone corners around showers and baths. Mould tends to grow on wet surfaces and objects, therefore it is important that you clean surfaces underneath bathroom items including shampoo bottles, beauty products and soaps. Clean each product in turn and wipe dry to prevent mould growth.

You can remove mould from bathroom walls and ceilings by using an anti-mould wash and specially designed paint additives. These products combine to effectively kill off mould from problem areas and prevent it from coming back.

The mould wash concentrate is a fungicidal treatment designed to remove the mould from all bathroom surfaces. It works on tiles, as well as wood and painted surfaces. Start treatment by pre-washing the affected areas, removing any dirt and debris.

Once the surface is clean and smooth, dilute the mould wash concentrate with water. You can now wash the prepared surface with the liquid, using a sponge, brush or cloth. Wait for the liquid to dry thoroughly before applying another coating to badly soiled areas.

The next stage involves the anti-mould paint additive. This can be added to any paint type as well as tile grout and wallpaper paste. Simply add to your choice of paint and mix well. You can then paint over the affected areas in your choice of paint as per the manufacturer's instructions. The additive’s properties mean that the mould won’t return even in areas prone to condensation.

Permagard provide these products together with all you need to tackle bathroom mould in our mould remover kit.

Condensation is a common contributor to the start of black mould growth. Extra moisture in the air and heat from showers and baths make for the perfect environment for mould to grow. Taking a preventative step against condensation is therefore a great way to keep black mould in check.

We’ve discussed the importance of regular ventilation and reducing airborne moisture levels but there is a way to help reduce condensation from occurring. PermaSEAL anti-condensation paint is a water-based product that can be applied to bathroom walls and ceilings. It draws thermal energy from the room to heat the surface it has been applied on. By warming the surface, condensation can take up to 60% longer to form.

Getting rid of mould on bathroom ceilings

Getting rid of mould on bathroom ceilings can be tricky since scrubbing a ceiling is awkward. The mould damage may have started to damage the paintwork and start flaking it away. Although there’s plenty of advice for home made recipes using household items, it’s always best to use a professional mould removal kit. Why? You need to remember that mould colonies are extremely resilient, it’s how they survive.

To truly eradicate mould you need specialist mould wash, designed to work specifically with painted ceilings. Our anti mould kit also contains a paint additive that will provide an anti-bacterial presence to your finishing coat of paint.

How to remove mould from bathroom tiles

Removing mould from bathroom tiles is more straightforward than removing it from a painted ceiling but the task still needs attention. Unlike the smooth surface of a tile, any grout offers a perfect place for mould to thrive. Mould wash concentrate should be applied with a sponge rigorously and then left for one hour before rinsing. Make sure you’ve got plenty of ventilation when doing this and wear a mask and eye protection. For more information, read our guide on mould removal from walls.

Do you have a question about bathroom condensation or removing mould from your bathroom? Contact us on 0117 982 3282 and our damp proofing experts will be happy to help. There is no charge for our technical advice.